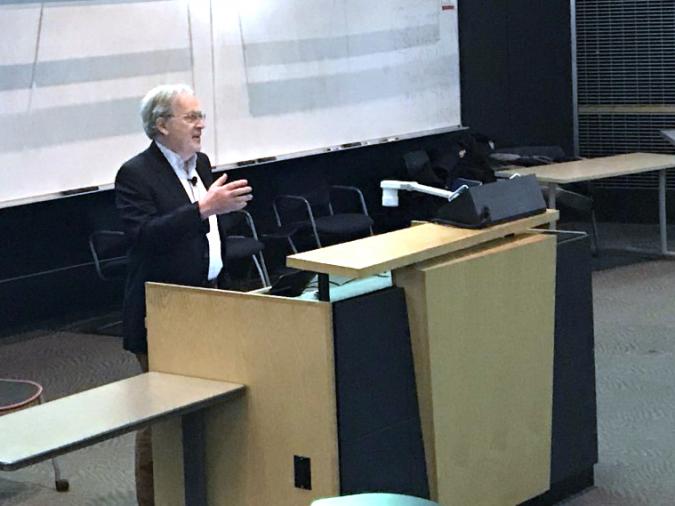 Valiant, a global expert in theoretical computer science, discussed artificial intelligence; specifically, a theoretical framework to combine learning and reasoning under a common semantics and also the experimental challenges for its validation of the cognition process.

Dr. Valiant received the 2010 A.M. Turing Award, known as the “Nobel Prize of Computing,” from the Association for Computing Machinery (ACM) in recognition of his ground-breaking contributions to the theory of computation, in particular the theory of probably approximately correct learning; the complexity of enumeration; and the complexity of algebraic computation - and the theory of parallel and distributed computing. In addressing some of the deepest unsolved problems in science, his work is highly regarded for its creativity and striking combination of depth and breadth.

The Robert Stewart Distinguished Lecture was established in 2003 by Kimmy and Dr. Long Nguyen (Ph.D. computer science ‘75), in honor of Robert Stewart, Professor Emeritus of electrical and computer engineering. Nguyen named the lecture after Stewart in recognition of his outstanding dedication to the profession of computer science and his many years of mentoring and friendship.

The lectureship allows the Department of Computer Science to host distinguished scholars and professionals, creating opportunities for collaboration and academic excellence. Valiant met with faculty and students during his Iowa State visit.

Dr. Valiant is a fellow of the Royal Society of London and a member of the U.S. National Academy of Sciences. His many honors and awards include the Nevanlinna Prize at the International Congress of Mathematicians in 1986, the Knuth Prize from the ACM in 1997, and the European Association for Theoretical Computer Science (EATCS) Award in 2010. He is the author of two books, Circuits of the Mind, and Probably Approximately Correct.