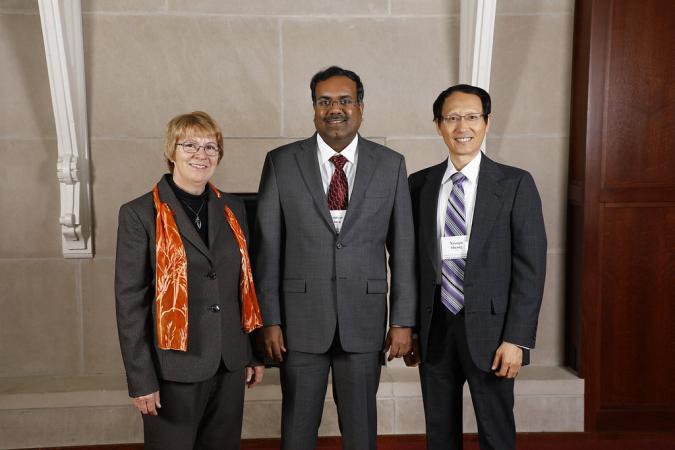 Ames, Iowa—Iowa State University's College of Liberal Arts and Sciences honored Srinivas Aluru with the John V. Atanasoff Discovery Award at an honors and awards ceremony on October 26, 2017 in Ames, Iowa. The award recognizes alumni of the College of Liberal Arts and Sciences who have significantly advanced scientific knowledge through laboratory accomplishments and/or management.

Aluru is a professor in the College of Computing and co-executive director of the Institute for Data Engineering and Science at Georgia Institute of Technology. He co-leads the NSF South Big Data Regional Innovation Hub, which serves 16 southern states and Washington D.C. He conducts research in high performance computing, large-scale data analysis, bioinformatics and systems biology, combinatorial scientific computing, and applied algorithms.

Aluru is also a Fellow of the American Association for the Advancement of Science (AAAS) and the Institute of Electrical and Electronics Engineers (IEEE).

Previously, Aluru served Iowa State University for 14 years as a faculty member in the Department of Electrical and Computer Engineering. He held the Mehl Endowed Professorship (2009-2013), the Richard Stanley Chair in Interdisciplinary Engineering (2006-2009), and chaired the interdepartmental graduate program in bioinformatics and computational biology (2005-2007).

He received his bachelor of technology in 1989 from the Indian Institute of Technology, Madras. He received his M.S. in 1991 and Ph.D. in 1994 from Iowa State University.

The award recognizes the achievements of John V. Atanasoff and graduate student Clifford Berry, who invented the world’s first electronic digital computer. At the time of the discovery, Dr. Atanasoff was a faculty member in Iowa State’s Department of Physics. The computer incorporated several major innovations in computing including the use of binary arithmetic, regenerative memory, parallel processing, and separation of memory and computing functions.