While most college students are prepping for summer internships or other warm weather adventures that follow closely on the heels of finals, an elite group of ISU student programmers is preparing for an adventure half-way around the world. Iowa State University’s Department of Computer Science programming team is advancing to the ACM International Collegiate Programming Contest World Finals, which will take place May 15th-20th. More than 40,000 university students, from 102 countries around the world competed for a spot at the prestigious ACM finals. As if further proof were needed that the students from Iowa State University’s Computer Science Department are truly among the programming elite, some of the other U.S. university teams advancing to the finals include: MIT, Harvard, Carnegie-Mellon, Cornell, and Stanford.

If the term “three-peat” is familiar, you understand just how impressive the ISU Department of Computer Science programming team’s accomplishments are, as this is the third consecutive year they have advanced a team to the ACM ICPC World Finals. 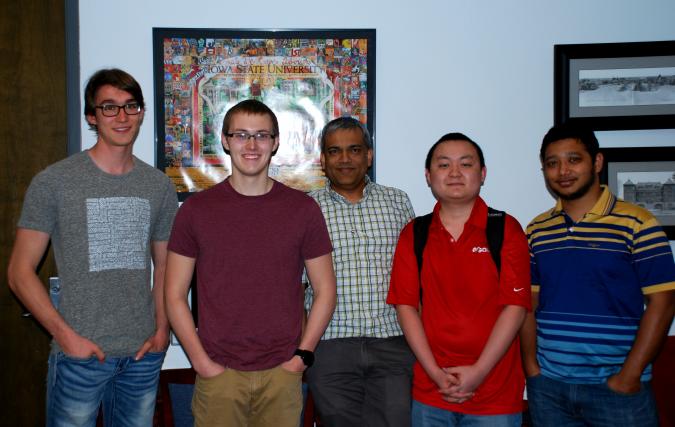 their performance at the regional competition, which was held this past October.

During the World Finals, each three-person team is given eight or more complex problems to solve, and five hours to complete them. The teams are positioned in small workstations separated by half-walls, so everyone can see everything that is happening. There are different categories of awards, such as “First to Solve,” as the competition progresses. In addition to awards received after the end of the contest, the teams are given items like different colored balloons to display in their workstation to signify their particular accomplishments during the contest. These visual symbols placed in plain view for the other teams to see, adds to the pressure of solving each problem quickly and accurately. The team stated they let each other play to their strengths, as one person’s unique view may offer the perspective needed to solve an especially challenging problem.

The 128 teams battling it out in this year’s ACM ICPC World Championship are required to use computers and equipment specifically provided by the competition, and are not allowed access to any other electronics, such as phones, watches or iPods for the duration of the competition. To work out potential glitches, there is a full dress-rehearsal the day before the actual competition. Monitors are stationed throughout the competition area to ensure the teams do not communicate with anyone other than their own team members. There are also viewing stations set up around the venue to allow spectators to view the competition. You can get an idea of the difficulty of the problems on the ACM ICPC website at: https://icpc.baylor.edu/worldfinals/problems.

“The competition is very fierce. Teams from countries like Russia and China treat this like their Olympics,” offered Professor Simanta Mitra. “Programming is all the students from some of these other countries do, whereas our students are involved in other activities and interests. It makes them very hard to beat.” Team member, Jacob Smith, agreed, “Knowing that some of these teams practice programming problems all day, every day, can be intimidating.” Smith, who is competing in the ACM ICPC World Finals for the second time, competed last year. The competition limits World Finals team members to two years of finals participation, which Smith doesn’t mind. As a testament to the fact that these students stay extremely busy outside the tournament, Smith leaves for his internship at Microsoft the day after he returns from World Finals.

The ACM ICPC World Finals will livestream on May 19th on the ACM ICPC YouTube Channel at: https://www.youtube.com/channel/UCDBXshZdICEHr0HSVsLrydA