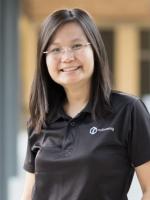 Nok Wongpiromsarn, Assistant Professor in the Department of Computer Science, received a National Science Foundation (NSF) grant in the amount of $599,854 for her collaborative research project titled, "Collaborative Research: CPS: Medium: Sharing the World with Autonomous Systems: What Goes Wrong and How to Fix It."

The three-year project is a collaborative proposal with Ufuk Topcu from the University of Texas at Austin.

Project abstract: As autonomous systems start to operate in open, uncontrolled environments alongside humans, safety becomes a major concern. In applications in which human-operated systems and autonomous systems are in close interaction, the heterogeneity causes different agents to exhibit different behaviors under the same situation due to the differences in how they see the world and make decisions. For example, autonomous vehicles tend to be more conservative than average human drivers, leading to instances of confusion and frustration of human drivers when encountering an autonomous vehicle. As a result, understanding the effects of inconsistencies among interacting agents on the overall system is critical for the adoption and acceptance of autonomous systems.

This project aims to develop novel algorithms that will quantitatively and succinctly characterize the sources and effects of inconsistencies in perception and decision-making among the interacting agents. Based on this characterization, the project will develop efficient synthesis algorithms for autonomous systems to actively identify the inconsistencies and influence the behaviors of the other agents to improve the safety of the overall system. A key innovation lies in a rigorous approach integrating probabilistic formal methods, games on graphs, joint perception and planning, and convex optimization. While the resulting algorithms will be applicable to a wide range of cyber-physical systems, demonstrations will leverage an experimental platform in which autonomous vehicles interact with each other as well as human-controlled vehicles in mockup urban environments. The project will likewise promote outreach to industry, regulatory agencies, and the broader cyber-physical system (CPS) community through technical short courses. All educational material, demonstrations and software generated by the project will be shared publicly.

This award reflects NSF's statutory mission and has been deemed worthy of support through evaluation using the Foundation's intellectual merit and broader impacts review criteria.

Congratulations to all involved!