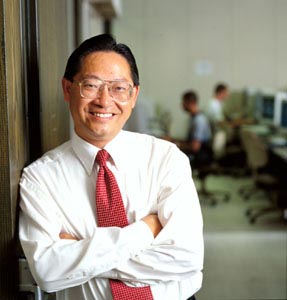 Back a few years ago, Johnny Wong, professor of computer science, served as the principal investigator of a $200,000 grant funded by the office of INFOSEC Research and Technology of the National Security Agency (NSA).

The research project, "Intelligent Multi-Agent for Intrusion Detection and Countermeasures," looked to develop the technical foundation for the work based on known vulnerabilities or known user activities and components of systems that may be monitored.

"The proposed research sought to design, implement and evaluate adaptive and mobile intelligence multi-agents for intrusion detection and countermeasures in a distributed heterogeneous computing environment," said Wong, who worked on the grant with fellow Department of Computer Science professors Les Miller and Vasant Honavar.

Iowa State's ISSL is one of the first seven Centers of Academic Excellence in Information Assurance Education designed by the NSA. Information assurance is the term generally used to describe issues related to the technology and policy of securing information on computer networks.

"Most computers are connected to LANs and then on to the Internet," Wong said. "Because of that, most of us think we can protect our network systems. But there is no such thing as perfect protection. We're trying to teach and further learn how to protect computer systems from attack.

"My research centers around the most up-to-date technology available to protect intrusion into these computer systems and provide countermeasures."

Wong says the nation's reliance upon computers, and ultimately the Internet, for information makes us more vulnerable.

"Our lives depend on this infrastructure," he said. "One of the reasons why the government is paying so much attention to this area is that it is a natural target for our enemies. The Internet and the World Wide Web are becoming even more important in terms of research and education. It's going to become more challenging in the future to protect that system."

The development of graduate level courses in information assurance is one way to combat that future challenge.