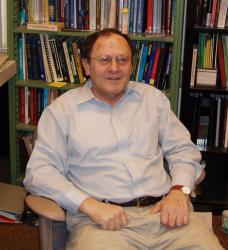 The Computer Science Department is sad to learn of our colleague, Dr. Giora Slutzki, who passed away on February 14, 2021. Dr. Giora Slutzki dedicated his life to the university and department during his long career at Iowa State University. We will deeply miss his contributions, wisdom, quick-wittedness, and genuine care for students and colleagues alike.

Giora was born December 11, 1943, the son of Itzhak and Ruth (Gruber) Slutzki. He graduated from high school in Israel in 1962. After getting his bachelor's degree in 1970 from Hebrew University and his master's degree from The Weizmann Institute in 1973, he earned his Ph.D. from Tel-Aviv University in 1977. He moved to Iowa State University in 1983, where he spent the next 37 years in the Department of Computer Science, ascending to the rank of professor. During his time with the department, Giora was a dedicated researcher and instructor. Over the years, he taught courses covering various topics of the theory of games, knowledge, and uncertainty, discrete computational structures, the logic for mathematics and computer science, and computation theory.

Giora had numerous interests when not focusing on computer science research. He would relax by playing games like canasta, doing daily crossword puzzles with his son Daniel, and listening to opera and classical music. He enjoyed walks in the park with his family and continued to exercise at the gym, rain or shine.

Giora is survived by his wife, Rina Slutzki, his daughter, Naomi (Brandon) Whalen; his son, Dan Slutzki; and his grandchildren: Sephora, Aria, and Colette Whalen.  He will be laid to rest at the Iowa State Cemetery in Ames. Funeral arrangements are under the direction of the Rasmusson-Ryan Funeral Home and may leave Giora's family's online condolences at www.rasmussonfh.com.

The department sends our condolences to the family of Dr. Giora Slutzki.