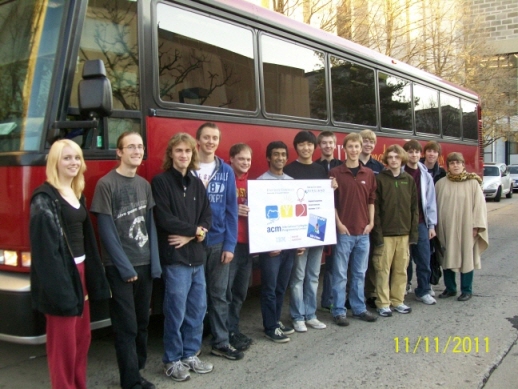 Cross-college students Bryce Sandlund (LAS - Computer Science), Kerrick Staley, (ENGR - Computer Engineering), and Devon Eilers (BUS - Management Information Systems) teamed up to take the second place in the regional ACM-International Collegiate Programming Competition (ICPC), on November 12 . Each year, computing students around the globe compete in this prestigious, IBM sponsored "Battle of the Brains." ISU participated in the regional contest at the University of Nebraska-Lincoln. Sandlund, Staley, and Eilers beat out 216 teams from 69 schools to earn their spot in the ACM-ICPC World Finals in Warsaw, Poland, May 14-18, 2012.


Dr. Simanta Mitra, coach for the ICPC teams at ISU, commented, "there are usually about 40 teams from South Dakota, North Dakota, Minnesota, Nebraska, Kansas, Missouri, and Iowa - and that makes the local contest incredibly challenging and fun at the same time. Winning an award at the site is always a very proud moment for us. Being one of the winning teams in the entire region is incredible! The winning students agree, it is an opportunity of a lifetime!"


Mitra provides them with practice opportunities to hone their skills and prepare for the competition each year. Practice competitions for this year started in August. Mitra said, "we categorize each student as being a beginner, intermediate, or advanced problem solver. We have different problem sets for each category and have students focus on solving as many problems before the contest as they can. We try and help students progress from beginner to intermediate and from intermediate to advanced."


Preparation for the world finals will progress much the same for Sandlund, Staley, and Eilers. Mitra says he anticipates drilling them so they are ready for success. "We will drive the contestants really hard! Our goal for the finals is to rank in the top 50."