Computer Science Team Places 49th out of 7,104 in the ACM ICPC World Finals 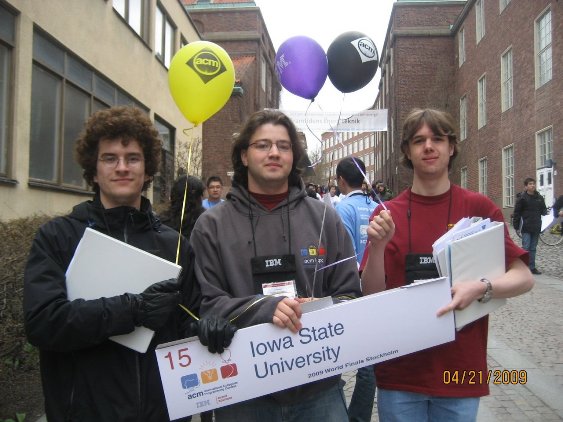 Yuly Suvorov, Pasha Kazatsker, and Michael Siebert (left to right, above) placed 49th in the world, and 6th among the 21 participating U.S. teams, in the 33rd annual 2009 ACM International Collegiate Programming Contest World Finals in Stockholm, Sweden on April 20. This years' world finals was hosted by the Royal Institute of Technology, a leading technological university in Europe. The team of three undergrad students, along with their advisor, Dr. Simanta Mitra (Computer Science), have been preparing for the world finals since placing 2nd in the regional ICPC competition in Lincoln, Nebraska last November. This is the second year in a row this team has made it to the world finals. Funding for the students' trip to Stockholm was provided by Cerner Corporation (Kansas City, KS) and Maverick Software (Ames, IA).

The ACM International Collegiate Programming Contest (ICPC) provides college students with opportunities to interact with students from other universities and to sharpen and demonstrate their problem-solving, programming, and teamwork skills. The contest provides a platform for ACM, industry, and academia to encourage and focus public attention on the next generation of computing professionals as they pursue excellence.

The "Battle of the Brains," as this contest has been named, has grown to be the largest and most prestigious computer competition of its kind. Since IBM began sponsoring the Contest in 1997, participation has grown from 1,100 to 7,100 teams. "This contest is about fostering the next generation of industry leaders in information technology and promoting strong foundations in both technology and business," said Doug Heintzman, director of strategy, IBM Software Group and sponsorship executive. "IBM understands the importance of investing in the bright young minds for the future of our industry and our world. In a global economy, talent needs to be able to respond to complex business challenges."

Congratulations to Yuly, Pasha, and Michael.