Atanasoff Today: The science behind the magic

When “Dumbo” soared into movie theaters in March, Iowa State alumna Feifei Wang played a small part in its flight.

Wang (MS ’14 computer science, Ph.D. ’17 computer science and applied mathematics) helps The Walt Disney Co. make important business decisions through the innovative field of decision science. Thanks to the skills she perfected at Iowa State, one of the world’s most magical brands is now backed by a little Cyclone spirit.

“My job is a combination of scientist and business consultant,” Wang said. “It’s a relatively new area to me, but because of my Ph.D. training, I had the foundation.”

“It was a dream come true because I really liked Disney even since I was a child,” said Wang, whose favorite childhood film was the animated classic “Beauty and the Beast.”

Based in Florida, Wang and her colleagues are involved with projects ranging from the algorithms used to enhance guest experience at Disney Parks attractions to the mathematical models that analyze the seasonality in the motion picture industry.

Wang directly supports The Walt Disney Studios, whose business holdings include Disney Theatrical Group, Pixar Animation Studios, Lucasfilm Ltd and Marvel Studios, among others.  Her statistical and mathematical models create predictions and optimizations for business tools such as media spending models and forecasting.

“When I joined I first had to learn about the previous forecasting model and also look for any variables or new factors that we could add to the current model to improve the performance. There are always more data and better methods.”

Wang said she enjoys the balance of working independently while also collaborating with Disney colleagues.

“We communicate directly with the management and science integration team, and then they make presentations to the distribution team, media team or others,” she said. 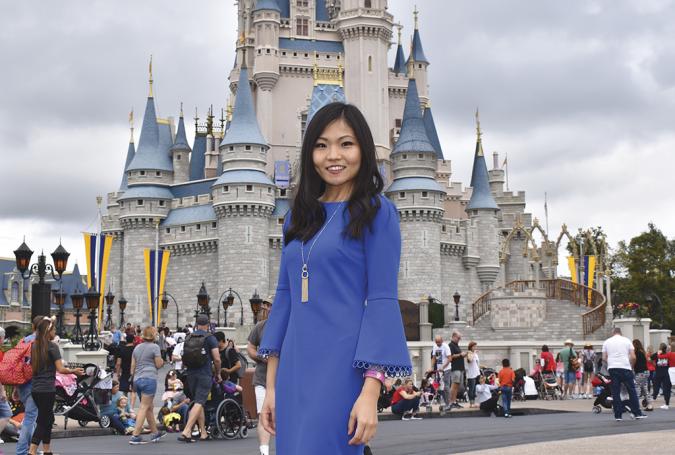 The day after Wang successfully defended her Ph.D. dissertation in Ames, she flew to Orlando for her Disney job interview.

“Every day, besides meetings and business conversations, I do coding in Python and other languages to develop science tools that we can provide to the client.”

For example, Wang’s tools can help provide recommendations for allocating a marketing budget for digital advertising.

Working at Disney, which even hosts its own annual data analytics conference, makes data even more exciting, Wang said.

“We look at so many interesting things. Looking at movie data is so much more fun than other types of data analytics,” she joked.

New Solutions for Similar Questions
Wang, who grew up in Beijing, China, always excelled at mathematics. As an undergraduate at the University of Science and Technology in China, she accepted an offer from ISU’s Department of Mathematics applied mathematics graduate program.

Then she found a second research passion when Professor of Computer Science Yan-bin Jia visited her campus, also his undergraduate alma mater, during her senior year in 2011.

“Through that talk I learned more about his research field,” Wang said. “After I came to Iowa State, I scheduled a meeting with him and wanted to know more about robotics and computer science.”

Wang ended up pursuing a co-major Ph.D. program in applied mathematics and computer science. Her research focused on the physics and dynamic mechanic equations used in robotics. Wang was a highly motivated student, always up for the challenge of learning new things not even in her domain, Jia said.

“We had a scanner in our lab that could take many hours to generate a full 3D model of an object,” he recalled. “To keep up with her schedule, Feifei would work on it overnight to scan objects that were used in some robot experiments.”

Still, Wang found time outside of the lab to make an impact at Iowa State, including reinstating the Computer Science Graduate Student Organization. As president, Wang helped organize game nights, poster presentations and a 5K campus run for “programmers to get out of their offices.” She even took ballet classes at Iowa State with Jia’s support.

Today, Wang’s robotics background is the most unique on her Disney team, she said, but success in her new field still relies on a solid foundation in computer science and mathematics.

“Everything is connected,” Wang said. “For example, in the robotics project we tried to grasp deformable objects from a table. We purely used a lot of math and mechanics theory behind it. But another way to view that project could be that I could also use machine learning algorithms to learn and change the parameters without knowing too much of the true physics behind it.”

Because of her understanding of mathematical theory and the programming skills she gained at ISU, Wang has adapted quickly to the fast-paced and deadline-driven world of decision science.

“Working on new areas broadens my horizons,” she said. “It’s the same type of questions, but solving them with different types of solutions.”

"Working on new areas broadens my horizons. It's the same type of questions, but solving them with different types of solutions."

Cyclone Connections
As a graduate student in co-major Ph.D. programs, Wang didn’t have time to watch many movies. Now she’s in showbiz.

“I’m more sensitive to what movies are coming out, how did they do, what the competitor’s movies are and so on,” Wang said. “Now when I see a movie I think more behind it — is this a good movie that this audience seems interested in? Did the movie do enough advertisements? Do I see them in social media networks? Everything together is so important to finally present the movie to audiences.”

So, if you were eagerly awaiting “The Lion King” or “Captain Marvel” know that your every click connects you to a fellow Cyclone. 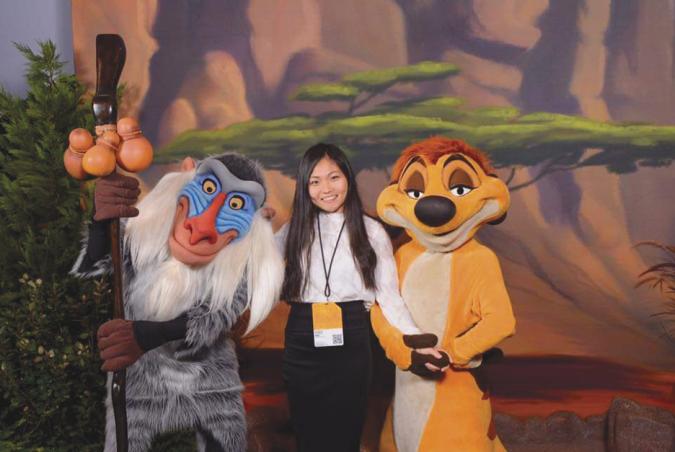 Wang poses with Disney characters Rafiki and Timon from "The Lion King." Her work involves supporting Disney Theatrical Studios and its stage productions.