While many spring events were canceled due to the pandemic, the Computer Science and Engineering Club 2020 made the most out of the academic year. New club leadership revamped the mission and meetings to help members and presenters get more out of their time together.

“This year we wanted to reinvent the club and truly set ourselves apart from other clubs,” said Austin Lowe (’22 software engineering), the club’s president. “Our club meetings felt very stale and there was nothing new brought to the table in a while. We worked hard to try new things and make each and every meeting a unique experience that would stick with each club member.”

Their efforts paid off—the club received the Most Improved Organization Award from the College of Engineering’s Engineering Week committee. The award was presented in February 2020.

Simanta Mitra, teaching professor of computer science and advisor for the club, said the club evolved quickly when they began acting on member input, added interactive presentations by speakers, and introduced new technology to communicate with current and prospective members.

Mitra said, “The current club officials, under the leadership of their president Austin Lowe, put in a lot of effort to make the club more inclusive and accessible – and fully deserved this award.” 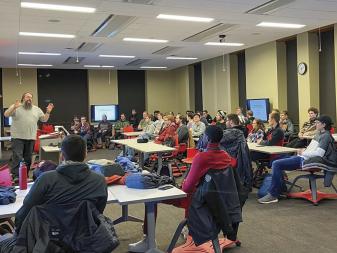 On Feb. 29, 2020, 25 middle and high school students had the opportunity to program robots during a Science Bound event hosted by Yan-Bin Jia, professor of computer science. Science Bound is an Iowa State University program designed to engage underrepresented Iowa students in agricultural and STEM exploration.

Students participating in the robotics event worked in groups to program Dash and Cue robots to achieve tasks using locomotion, sensing, obstacle avoidance and wall tracking. The experience was an overwhelming success, earning a student rating of 10 out of 10. The outreach event was a collaboration of graduate students Matthew Gardner and Ling Tang, Assistant Teaching Professor Jinu Kabala and undergraduate students Aubrey Sijo-Gonzales and Healey Griffith.

Introducing LAS Connect - a free professional resource that allows you to offer and seek mentorship, connect with professionals with the same degree or industry and build and maintain a powerful network of fellow LAS Cyclones. Most exciting is this network’s potential to connect alumni to current LAS students, who can use its mentoring feature to help them reach professional goals. These capabilities allow alumni to choose how they want to support and mentor current students — from simply giving career advice and reviewing resumes to conducting informational interviews and more!  Sign up today via email, LinkedIn or Facebook at LASconnect.org. 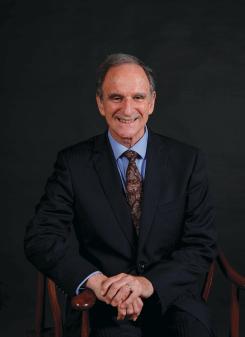 Martin E. Hellman, professor emeritus of electrical engineering at Stanford University, presented the 2019 Robert Stewart Distinguished Lecture on Nov. 20, 2019, at Iowa State University. Hellman, a long-time advocate of transparency in science and national security, discussed the ethical considerations in disclosing technology development, especially in regards to the U.S. government. His lecture was titled, “The Technological Imperative for Ethical Evolution.”

Hellman is credited with pioneering digital security, and received a joint $1 million A.M. Turing Award from the Association of Computing Machinery with Whit Diffie, former vice president and chief security officer for Sun Microsystems, for the invention of public key cryptography. This technology is the foundation for conducting secure digital transactions and the development of tools to counter cybersecurity. Hellman is a member of the National Academy of Engineering and an inductee of the National Inventors Hall of Fame.

“The audience was clearly engaged with questions asked by undergraduate and graduate students, faculty and people outside of the ISU community,” said Yan-Bin Jia, professor of computer science, who hosted Hellman.

Two alumni were honored at the 2019 College of Liberal Arts and Sciences Honors and Awards Ceremony on October 24, 2019, in Ames.

Gagan Chopra (’91 computer science, M.S. ‘93) was selected for the Computer Science Distinguished Alumni Award. Chopra, a group program manager and a member of the Technical Leadership Team in Microsoft’s Search and Advertising division, has contributed extensively toward the expansion of Bing and Bing Ads from one product and one market to multiple product lines across the global market, with a revenue stream of more than $8 billion.

Jeffry D. Sander (’04 computer science, Ph.D. ’08 bioinformatics and computational biology) was selected for the Genetics, Development, and Cell Biology Distinguished Alumni Award. Sander, a pioneering molecular and computational biologist at Corteva Agriscience, currently holds four patents and has been named among the world’s most highly cited researchers by Clarivate Analytics (previously Thomson Reuters – World’s Most Influential Scientific Minds) for each of the last three years. 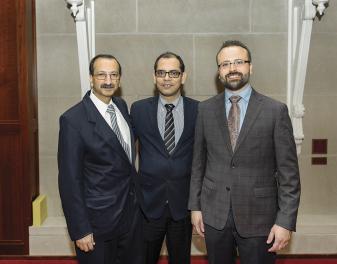 The Computer Science Graduate Student Organization (CSGSO) helped facilitate connections between graduate students and industry partners during monthly club meetings. Representatives from different industries presented to the group, then enjoyed networking, food and even some games with students. IdRamp, a decentralized identity technology company, co-hosted in October 2019; Corteva Agriscience, a global agricultural research and development corporation co-hosted in November; and Kingland Systems, a global data and technology firm founded by Iowa State alum David Kingland (‘80 industrial administration) and his wife Deb, co-hosted the February meeting. The events were attended by up to 70 students.

Additional speakers like John Deere had to be canceled due to the pandemic, but students look forward to resuming these meetings as soon as possible.