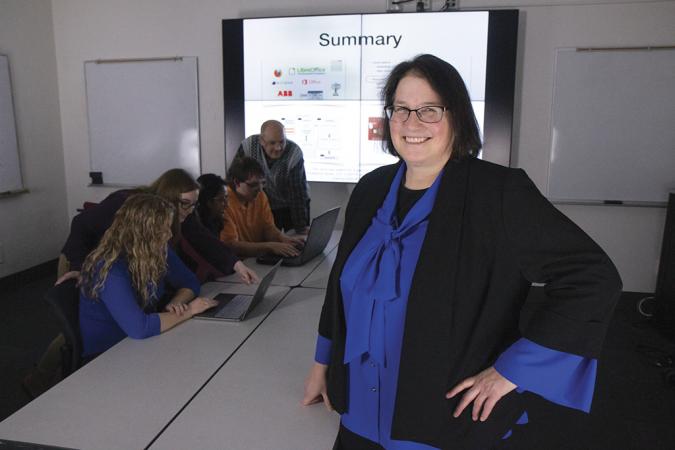 Cohen leads a team of six undergraduate and graduate students who conduct cutting-edge research in the area of software testing.

After firing up your laptop and launching your web browser, you click your way through several tasks—ordering concert tickets, researching the value of your car and tracking down the perfect chili recipe. Although you thoroughly understand technology, you’re not currently thinking about the underlying code, algorithms or thousands of CPU cycles that are dedicated to automatically testing your browser as you peruse the internet.

You didn’t have to focus on those underlying functions because researchers like Myra Cohen—the Lanh and Oanh Nguyen Endowed Chair of Software Engineering and a professor in the Department of Computer Science—have dedicated their careers to software testing research that keeps your web browser running seamlessly and smoothly.

“In Firefox alone, there are 2,000 customizable settings that an end user can perform and each of those operations must be tested,” said Cohen. “From a software testing perspective, there are more testing possibilities than atoms in the universe.”

However, Cohen explains how highly customized software targeted toward end users presents a unique set of challenges for software testing researchers such as herself.

“There are an infinite number of problems that can arise within software that provides end users with so many choices and functions,” she said. “Our job as testers is to minimize what has to be tested. We develop code that simplifies the testing processes, allows devices to remain functional if there is a bug and heals those glitches in real-time.”

"In Firefox alone, there are 2,000 customizable settings that an end user can perform and each of those operations must be tested.
From a software testing perspective, there are more testing possibilities than atoms in the universe."

"I fell into computer science"
Most researchers are curious by nature. They love the rigor of the scientific process—as they ask tough questions, test hypotheses and discover inventive solutions to complex problems. A complicated labyrinth of challenges will often energize researchers.

Cohen is no exception.

“I love having a brick wall in front of me and figuring out how to go around it or take it apart to get through it,” she said. “Growing up, I was always very curious and I loved problem solving and working on puzzles.”

Cohen earned a Bachelor of Science in the natural sciences from Cornell University in New York. After securing a job as a data analyst for a hospital, she discovered her love for software.

Charged with managing complex hospital processes while improving efficiencies and patient care, Cohen used software to streamline and automate several aspects of the job. Immediately intrigued by the software, and wanting to learn more, she began working on her master’s degree in computer science at the University of Vermont. 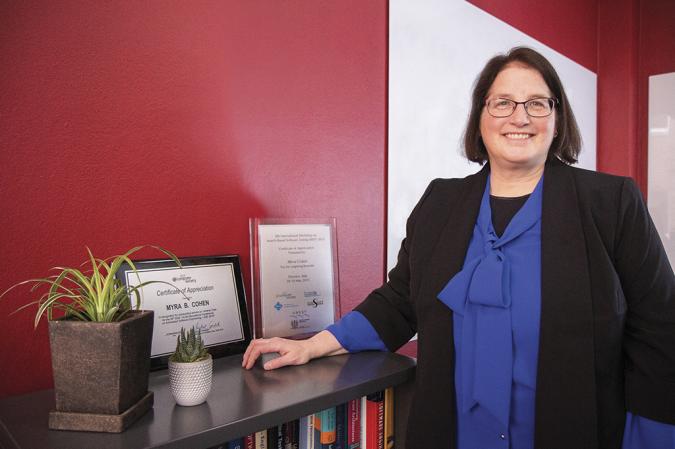 Cohen, who arrived on the ISU campus in August of 2018, loves teaching students and inspiring them to pursue scientific research.

This inaugural introduction to using complex software for business was the springboard from which Cohen would launch an extraordinary career as an academic, a professor and a researcher in the computer- science field.

“I fell into computer science,” said Cohen. “I didn’t start out studying it, instead I was drawn into it.”

Cohen would go on to earn her Ph.D. in computer science from the University of Auckland in New Zealand, but not before discovering her love for teaching, mentoring and explaining technical information.

"I realized that I loved to teach"
Two concurrent opportunities exposed Cohen to teaching and changed the trajectory of her career, steering her into academia.

“While I was working at the hospital, I was charged with giving presentations and I really liked teaching others and helping people understand technical information,” said Cohen. “At the same time, while earning my master’s degree, I became a teaching assistant for a software engineering class.”

She excelled at teaching and several months later, she was hired as a lecturer for undergraduate computer science classes.

Cohen’s love for teaching was the catalyst that sparked her to move overseas, continue her education and earn a Ph.D. at the University of Auckland in New Zealand. “I just knew I wanted to be an academic and I knew that I wanted to guide, support and advise undergraduate and graduate students.”

Described as the “most meaningful and rewarding” aspects of her career, Cohen highlights that there is nothing more important than being able to ignite student interest in research and computer science in general.

"I love having a brick wall in front of me and figuring out how to go around it or take it apart to get through it. Growing up, I was always very curious and I loved problem solving and working on puzzles."

She currently teaches advanced software engineering topics to undergraduate and graduate students in computer science.  She also leads and mentors a team of six research students.

“It’s amazing watching the lights go on for students as they analyze data, learn new information and solve problems,” said Cohen. “I love the one-on-one interaction and watching students grow.”

Mikaela Cashman (’20 Ph.D. computer science) credits Cohen with shaping her successful academic and career paths. “I wouldn’t be working in research if it wasn’t for her. I am so grateful for Myra and the research opportunities that she has provided me.”

In 2017, Cashman was a student at the University of Nebraska–Lincoln, working on her master’s degree in computer science and conducting software testing research with Cohen. When Cohen accepted a faculty position at Iowa State, Cashman followed.

“I wanted to continue working with Myra, and that’s what brought me to Iowa State,” said Cashman. “Her ability to creatively connect computer science to other disciplinary areas, such as biological systems, is special.”

Cohen’s interdisciplinary work in melding computer science with other academic arenas has not only inspired students, but has also advanced research in the software-testing sphere.

"We are working on the edge of multiple domains. In our research we look to nature and we ask how we can mimic the natural world in our software programming and code development."

Computer Programs Mimic the Natural and Physical Sciences
Although Cohen is firmly planted in the computer science world, the natural sciences have clearly impacted her award-winning and nationally-recognized research in the field of software testing.

Cohen uses colorful synergies between the natural sciences and computer science—as a way to creatively brainstorm, visualize and problem solve as she designs software testing algorithms and code.

“We are working on the edge of multiple domains,” she said. “In our research we look to nature and we ask how we can mimic the natural world in our software programming and code development.”

As Cohen explores, analyzes and breaks through difficult software testing problems, she views these challenges through the lens of those who work in biology, chemistry, genetics and even animal science. These adopted mindsets help her to reason about the software testing solutions that she is developing.

“When a surgeon performs an organ transplant, it is critical for that surgeon to monitor the impact on the surrounding veins, arteries and larger systems,” said Cohen. “When software testers place a new algorithm into an existing software program, we are also transplanting new functionality into a complex and delicate system that must operate seamlessly after changes are made.”

Ultimately, Cohen’s research in software testing reduces time-to-market for product developers and allows engineers to focus on product innovation, instead of hours of painstaking system reconfigurations due to bugs and glitches. When software testing is efficient and fast, everybody in the development chain wins.

“Myra is really unique and so is her ability to unite all of these different disciplines with software testing research,” said Cashman.

In addition to the natural sciences, Cohen also borrows from the physical sciences. Although she doesn’t work with molten alloys, she channels the same slow-stage, iterative processes that are used to soften metals.

When metallurgists turn hard metals into pliable metals, they do so by heating and cooling them. “It is essential that the metals slowly cool, or they break,” she said. “This slow process happens in a series of stages, until the metal achieves the desired malleability.”

“When we build test suites to find the proper configurations, we develop them in stages and we ask questions and evaluate at each stage,” she said. “Then we move to the next stage, but only after stability is achieved at earlier stages.”

"I was humbled that they named the department after me"
Throughout her career, Cohen’s research has earned numerous awards and honors, as well as special recognition for her accomplishments in software testing research.

Her research has garnered attention from the National Science Foundation, earning her an NSF CAREER award. At Iowa State, and previously at the University of Nebraska–Lincoln, Cohen was awarded named professorships.

In addition, the Faculty of Science at the University of Auckland temporarily renamed their computer science department in her honor. For one week, the department became “The Myra Cohen Computer Science Department” to celebrate her exemplary achievements and research advancements in the computer science field.

As part of commemorating women’s voting rights in New Zealand, the university named all university science departments after notable female alumni. “I was honored and humbled to be selected as the computer science graduate who was recognized,” said Cohen.

Cohen was also named an Association for Computing Machinery Distinguished Member for her accomplishments in the computing field. She received an Air Force Office of Scientific Research Young Investigator Award, a prestigious honor given to researchers who make significant contributions to their field.

"Computer science really is fun and exciting"
With a long list of accomplishments and rewards in her rear-view mirror, Cohen looks forward to helping Iowa State undergraduate and graduate students pursue their own adventures.

“There is nothing more rewarding than impacting the lives of students as they learn, grow and carve out their academic and career goals,” she said. “I hope that I can spark in them the same love for scientific research that I discovered when I was a student.”

Cohen is also committed to increasing the number of women who enter the computer science field and work in scientific research.

“There is an artistic side to computer science. It isn’t boring and sedate,” said Cohen. “At times, you are a like a novelist, because you have to effectively write about your research, explain it to the public and sell your ideas. We need to show women in particular the dynamic and fun sides of computer science and research, so they understand how inventive and creative it truly is.”

"There is nothing more rewarding than impacting the lives of students as they learn, grow and carve out their academic and career goals. I hope that I can spark in them the same love for scientific research that I discovered when I was a student." 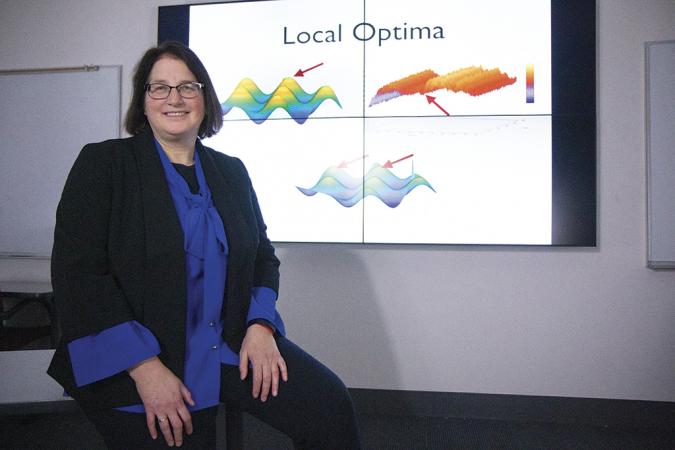 Cohen's software-testing research focuses on ensuring that your web browser, phone and search engine are operating with optimal speed and efficiency. "Many software engineering challenges can be re-modeled as optimization problems," said Cohen.