Atanasoff Today: At Home with Technology 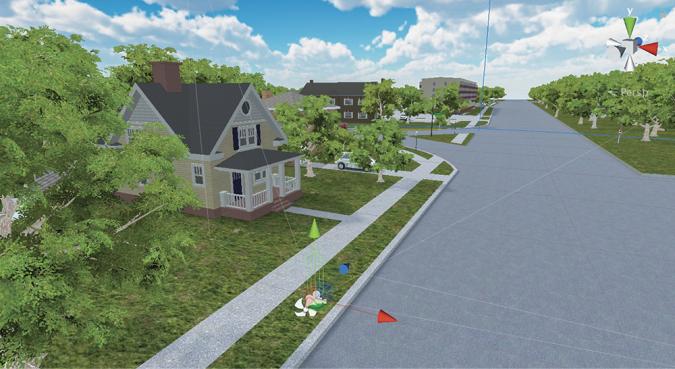 As a user experience researcher at Google Nest, Kofi Whitney spends a lot of time thinking about your home — everything from your thermostat to your morning routine. Now, with millions of people staying home as much as possible due to COVID-19, he is facing a strange reality for his research.

“We have to think about the validity of our results when people are at home all day,” he said. “Some people aren’t going to work. Maybe their budgets are different. There are many implications for how researchers work in this environment.”

It’s a good thing then that Whitney (’19 Ph.D. human computer interaction) is accustomed to unusual research environments, such as Iowa State’s Virtual Reality Applications Center. Thanks to the Human Computer Interaction program and Department of Computer Science, that’s where he developed the skills for his dream career in user experience research (UXR).

Thinking of you, the user

Whitney’s parents introduced him to technology at an early age. He grew up playing in computer labs at South Carolina State University, where his dad was a professor, and using home gaming systems like Atari, Commodore 64 and the more obscure Vectrex system.

He built his first computers as a preteen, did web design for a local company in high school and graduated from Benedict College in Columbia, South Carolina, with his undergraduate degree in computer science.

“In college what became interesting to me is not just the engineering of the software, but also the design from a user’s perspective,” he said. “I remember at Iowa State we would say ‘useful, useable and used.’” 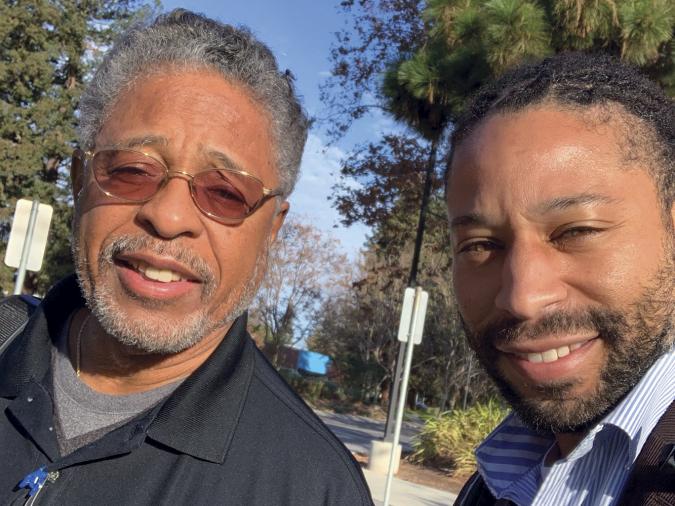 Whitney’s dad visits him at Google’s headquarters for the first time.

“It gave me an opportunity to have computer science as my home department at Iowa State, which was fabulous and the program faculty and staff were incredible in supporting me,” he said. “The experience gave me a breadth of skills, but also allowed me to really go deep into research.”

From science fiction to reality 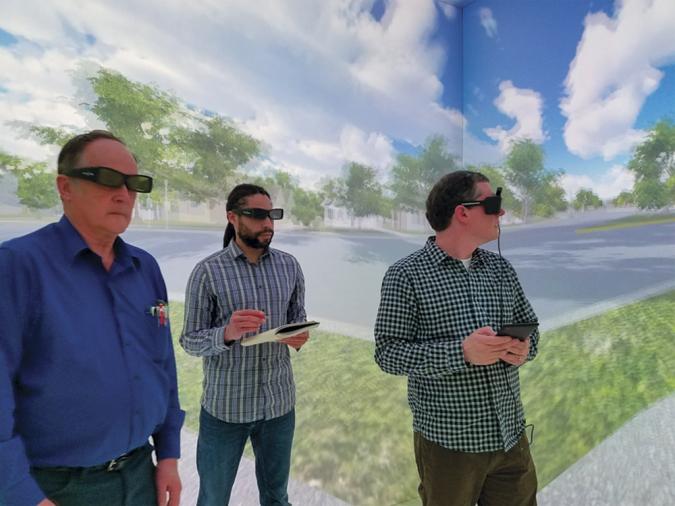 “Virtual reality is a concept that’s always fascinated me — getting the sense that you are somewhere else,” Whitney said. “Over the years the biggest surprise for me has been how quickly it’s gone from science fiction to reality. Virtual reality back then was not what it is today. You couldn’t put on an affordable headset in the comfort of your home.”

Through an interdisciplinary collaboration with Leslie Miller, professor emeritus of computer science, Sarah Nusser, vice president for research, and Stephen Gilbert, associate director of the VRAC, Whitney helped replicate a research study — one involving census takers — in a virtual environment.

At the time, the U.S. Census Bureau wanted to switch from using paper printouts to mobile computers during its door-to-door outreach.

“My group wanted to understand what it meant to bring personal computers into a task that involves navigation, wayfinding and entering information,” Whitney said.

In a traditional mobile computing study, researchers would follow participants into a real neighborhood and observe them while they completed a task using a mobile device. But mobile computing research in Iowa can be tricky, Whitney said. When people have to wear winter gloves to use devices or change up their walking pace in chilly temperatures, it can skew the data. Whitney’s team traded those harsh realities of Iowa weather for virtual reality.

In the VRAC, participants had the sensation they were navigating a large-scale neighborhood while simultaneously viewing real-world objects, like a digital map on a mobile device.

“Very early on we were able to demonstrate a lab that enabled us to study a real-world task in a controlled lab environment; a task that would otherwise need to be studied in a field,” Whitney said. 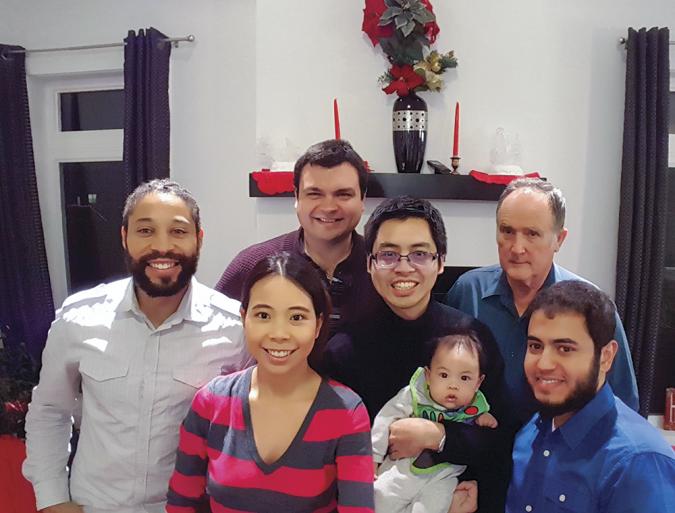 Today, long after completing his doctorate and moving to the San Francisco Bay Area, Whitney still meets weekly with Miller to discuss research.

“I had one of the best advisors in the world in Dr. Les Miller,” Whitney said. “I still consider him to be my advisor and we talk often.”

Miller said Whitney has all the critical qualities required to be a skilled and successful researcher, including empathy for users of new software and devices.

“Kofi is very intelligent, curious, determined to master new skills and has the desire and skill to understand existing literature before diving into a new topic,” Miller said. “As a person, Kofi is a very special individual. He is kind, always willing to help anyone, loves to explain complex concepts to other students and is fun to be around.”

Whitney’s virtual reality research at Iowa State was the perfect preparation for one of his first industry jobs at Intel Corporation. He started in Intel’s rotation engineer program and worked in virtual reality, wearable computing, gaming and smartphones, prior to joining its UXR group.

“The timing was incredible,” he said. “Through the lens of Intel, we were seeing the beginning of the consumer VR push. I was able to do user research and ensure that Intel’s customers would have awesome virtual reality experiences when that technology was launched. I got to work with world-class researchers, developers, business strategists and to really understand how a computing platform is foundational to these experiences.”

“I’m fortunate as a user researcher to be able to study groundbreaking technologies that are really fascinating and fun, and that require us to get
creative about the techniques and methods that we use.”

Virtual reality was made mainstream by the gaming and entertainment industries, but has unlimited potential for improving quality of life, Whitney said, from simulating a training with hazardous materials to demonstrating a medical procedure.

“What’s amazing about virtual reality is that it can be used in environments that are comfortable and safe and sometimes even collaborative,” he said. “This gives us the ability to do training and simulation for situations that wouldn’t allow for that in the real world.”

Not just a smart home, but a helpful one

At Google Nest, the technologies are all about the real world, with smart home products like thermostats and smoke and carbon monoxide alarms.

“This is another paradigm shifting set of products and technologies that change the way we live and work,” said Whitney, whose research focuses on home energy management. “It’s my job to understand people’s needs and motivations through research. I work with designers, product managers and engineers to ensure Nest’s offerings are expressions of our desire to have not just a smart home, but a helpful one.”

Whitney spends his work week planning, conducting, analyzing and reporting research. With your permission, he can even turn your living room into a field study site. On a typical field study day, he and his colleagues visit two to three homes, guiding participants through planned discussion topics and activities.

“Field studies are great because by situating study participants in their actual home environment, we are better able to invoke memories, experiences and values that are most important to people during our discussion and activities,” he said.

Whitney said there is an art and science to identifying how technology can give users new “superpowers” at home. Early on, he might ask questions that inform how a smart home product should be designed or how it should function for its users.

“What are the moments of delight and inconvenience in your home throughout the day?” he said. “What are your day-to-day routines in and out of your home? What does comfort mean to you at home? What lulls you to sleep? What keeps you up at night?”

Once a product is further along in development or released to the market, a UXR asks more specific and tactical questions, like how happy you were with the installation process of your smart thermostat. Together, all of those questions help Whitney explore how smart home products can best solve problems in your home.

Whitney, who has always been interested in major technological shifts — from mobile computing to virtual reality to wearable technology — said that Iowa State helped prepare him for his dream job.

“I’m fortunate as a user researcher to be able to study groundbreaking technologies that are really fascinating and fun, and that require us to get creative about the techniques and methods that we use,” he said. “For me, it’s something that I’ve dreamed of since I was a kid. Iowa State, the Department of Computer Science, the Human Computer Interaction program, my advisor, and the faculty and staff were tremendous in preparing me for these opportunities and enabling me to develop so that I could fulfill a dream.”