Atanasoff Today: A full plate for this computer science student

Threaded through every stage of Benjamin Escobar’s (’20 computer science) life is an insatiable appetite for computers, science and technology.

Whether he was exploring computers in elementary school, marveling at the double-helix structure of DNA molecules in high school biology class or analyzing handwriting forensics in college—Escobar has always been driven to satisfy his hunger for scientific and technical knowledge.

“I think I was born this way,” said Escobar. “I’ve been tinkering with computers since I was seven years old and programming since I was twelve years old.”

Escobar recounts a childhood surrounded by LEGOs and educational toys, as well as nurturing caregivers who fueled his curiosity and sparked an early interest in computers and technology.

He was only in third grade—still memorizing multiplication tables, learning playground etiquette and drinking juice boxes—when his stepfather approached him with an unusual challenge.

“He handed me a nonworking computer and said, ‘If you can fix it, you can have it,’” said Escobar. “He knew what he was doing. He understood that I wanted to use that computer and he was challenging me to look at the components, figure out the problem and devise a way to fix the hardware. This moment ignited a lifetime passion for computers, programming and technology.”

Escobar remembers examining the mess of wires and connections and almost innately understanding and making sense of the technology. Ultimately, he fixed the computer’s display and claimed the computer as his own.

“Since that moment, I was hooked on solving technical problems and computers,” he said. “It’s accurate to say that computers have been eternal in my life. It feels as if they’ve always been there.” 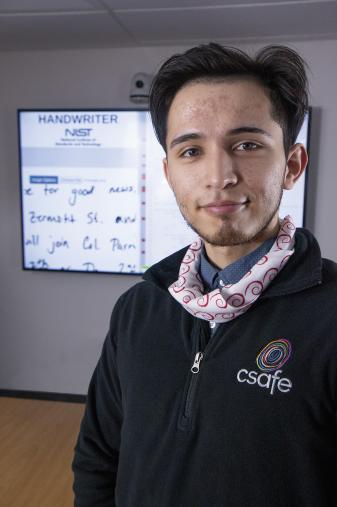 Exceeding Recommended Daily Requirements
Awake before sunrise and cramming for a genetics quiz, Escobar downs a cup of hot green tea, leaves his apartment and dashes to his statistics lecture. After taking diligent notes in computer science class, he heads over to his office in CSAFE (Center for Statistics and Applications in Forensic Evidence), where he uses computational analysis to research handwriting forensics. After work, Escobar leaves for Linux Club—a 50-member student organization that he founded with friend and fellow student Jacob Moody (’20 computer engineering).

“There are so many opportunities for computer science students at Iowa State, both inside and outside of the classroom,” said Escobar. “I’ve always loaded up my plate with experiences, jobs and academic challenges because these opportunities practically fly at you on this campus.”

Starting From Scratch
In 2017, when Escobar wanted to join Iowa State’s Linux club, there was a slight problem—Iowa State didn’t have a Linux club.

“Linux makes an appearance everywhere,” said Escobar. “It’s important to understand this operating system and to know how to use it. The best way to do that is by sharing ideas with and learning from other Linux fans. That’s why I was so driven to start this organization.”

Escobar started the official Iowa State student organization for those who want to share information, promote Linux and learn more about the operating system. He jumped through the hoops; crafting a plan, filling out paperwork, making a presentation to university officials and even doing some legal research.

Today, the ISU GNU/Linux Club meets every week, has upwards of 50 members and has been going strong since 2018, when it was formally recognized by the Student Activities Center as a university-sanctioned student club. Escobar is listed as its president and founder.

Most recently, the club was awarded the 2018-19 Newcomer of the Year Award, by the Student Engagement Committee from Engineers’ Week. Escobar accepted the honor at the Engineers’ Week Banquet on February 22.

“The goal of starting this club was to unify the Iowa State Linux community, and I think we succeeded,” said Escobar. “We’ve also sparked interest in Linux to those who are in non-computing fields as well. We’ve formed a community, we have fun and we’re learning from each other.”

The Art and Science of Handwriting Analysis
Nestled in the Durham Center, The Center for Statistics and Applications in Forensic Evidence (CSAFE) operates one of its four national research centers on the Iowa State campus. Conducting research and analysis for forensic scientists, investigators and legal experts, employees at CSAFE’s Iowa State site create statistical analyses and interpretations that are focused on the forensic sciences.

It is here at CSAFE where Escobar builds intricate algorithms and code that help forensic investigators analyze handwriting and ultimately, solve crimes. He also develops interfaces that enable investigators to use software that is user-friendly, easily navigable and intuitive.

“I work on a team that helps detectives, crime experts, document examiners and forensic scientists add data and science to the art of handwriting analysis,” said Escobar.

Escobar is thrilled to work on research that creates real-world impact for forensics investigators and detectives who attempt to solve crimes and unravel mysteries.

“There is a signature uniqueness to a person’s handwriting,” said Escobar. “The space between the letters, how long the pen remains on the paper while letters are written, the shape of the letters and the space between letters—all of these ratios and metrics, and more, are calculated within our program.”

Blending Flavors
A unique fusion of bioinformatics, computer science and statistics expertise provides a powerful blend of talent and knowledge that is used to develop forensic tools in the CSAFE lab.

“Working at CSAFE, with so many experts in a variety of fields, is the ultimate in mind sharing,” said Escobar. “A computer science researcher thinks differently than a statistics expert, and we bring different strengths and viewpoints to our job. It’s amazing.”

"There is a signature uniqueness to a person's handwriting. The space between the letters, how long the pen remains on the paper while letters are written, the shape of the letters and the space between letters--all of these ratios and metrics, and more, are calculated within our program"

“Ben approaches challenges in a very sophisticated way and he exhibits a contagious enthusiasm for his work and for the expertise of those who work with him,” said Amy Crawford (’20 Ph.D. statistics), one of the four members of Escobar’s research team. “We would not be as advanced in our research without his coding talents and communication skills.”

Escobar believes that strong communication skills lie at the heart of most interdisciplinary efforts. “When you bring your expertise to the table with other experts, it’s essential to be a good listener as well as a good communicator, as you advocate from your vantage point and learn from others.”

Crawford commends Escobar for this creativity and enthusiasm. “Ben came to us with an idea to create a web page that would make our work more accessible and understandable to the public,” she said. “He created this beautiful web application that is a great publicity tool for CSAFE.” 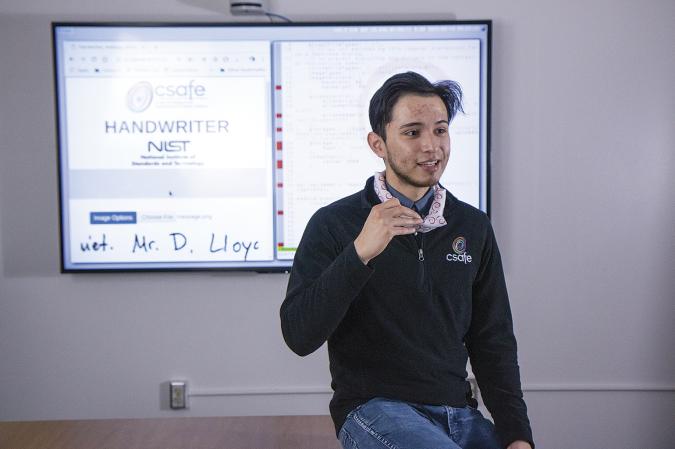 For his exemplary efforts as a productive, innovative and dedicated student researcher, Escobar was nominated by CSAFE staff for ISU Student Employee of the Year.

“Ben goes above and beyond what is required of him,” said Crawford. “He provides great solutions very quickly and he shows incredible initiative.”

Fill Your Plate
Escobar notes that interdisciplinary research is critical in professional settings like CSAFE, and important in the classroom as well.

“I’m a computer science major who is also studying bioinformatics,” he said. “From both a business and academic standpoint, it’s important to learn about other fields and to engage with others who are outside of your field of study. The process deepens your knowledge base and expands your thinking.”

Escobar credits his interdisciplinary endeavors at Iowa State, in both research and academics, with strengthening his interpersonal-leadership skills and enhancing his overall college experience.

“I’ve been able to have so many incredible experiences at Iowa State,” said Escobar. “It’s so important to get involved. Load up your plate, and fill it up with an array of diverse opportunities. Make sure that your college experience is like a well-balanced diet, with many different items.”

With his full plate of experiences, academic explorations and research opportunities, Escobar illustrates that an Iowa State education can help build meaningful personal connections, robust careers and a feast of great college memories.

"I've been able to have so many incredible experiences at Iowa State. It's so important to get involved. Load up your plate, and fill it up with an array of diverse opportunities. Make sure that your college experience is like a well-balanced diet, with many different items."