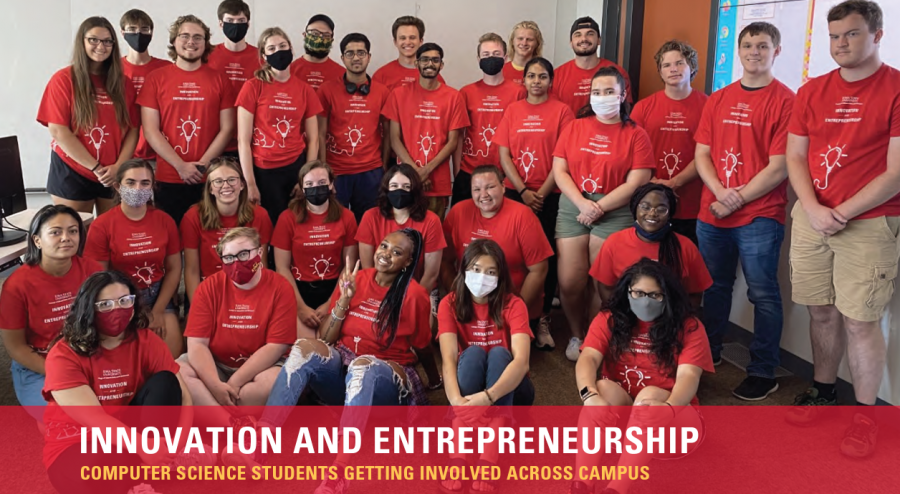 The Department of Computer Science is home to some of the best and brightest students at Iowa State University. Our students are highly involved across campus in addition to being high academic achievers.

The College of Liberal Arts and Sciences (LAS), which hosts the Department of Computer Science, launched the Innovation and Entrepreneurship (I+E) Academy in the Spring of 2021. Computer science students have been involved in the program since its inception; merging their interests of computing and entrepreneurship.

The LAS I+E Academy offers LAS students the opportunity to engage in interactive activities to foster their entrepreneurial drive. During the first year, they gain insight into what it means to be an entrepreneur through readings, reflections, case studies, and guest speakers. In the second year, the students match with university and local mentors who help guide them as they advance their projects forward.

JJ ShraderBachar is a senior majoring in both computer science and Spanish. ShraderBachar joined the I+E Academy to help propel his media company, RWF Media. He specializes in making websites and managing social media accounts for small businesses.

ShraderBachar hopes to expand RWF Media to become a global company, something he hopes the academy will be a stepping stone towards.

“My educational background in computer science has helped me a lot with problem-solving,” ShraderBachar said. “I’ve certainly encountered some problems in entrepreneurship and being able to problem solve effectively has helped a lot.”

ShraderBachar has advice for other hopeful entrepreneurs: “You have to put in the work. It won’t work unless you do.”

Sundar Shivraj, a senior in computer science and data science, joined the academy because he saw this as a chance to take an idea he had always had and make it into reality, building from the ground up.

Shivraj is working on a collaborative project with other students involved in the academy that focuses on mental health, called, The Vibe.

“During our time at Iowa State, we have noticed that many students need help or support with their mental health, but often are unsure of where to go or do not have access to some of the options on and around campus,” Shivraj said.

The first goal of their project is to create a welcoming space for students to visit when they need to spend time navigating their headspace and mental health needs. The second goal is to establish connections between students and other organizations on and around campus to make mental health resources more available and accessible to students.

Shivraj is also working on an individual project that is a multimedia platform/studio where people can share anonymous stories without fear of judgment.

The skills that Shivraj learned in the computer science classroom he feels have helped prepare him for other elements of being a student.

“I’ve learned things like organization, time management, and teamwork from my computer science classes which have all impacted my time at Iowa State in a positive way,” Shivraj said.

“You are the one thing standing in between you and your idea,” Shivraj said. “If you believe in your idea, you’ll find a way to make it work. An immediate goal for our department is to integrate an entrepreneurial mindset for all students, not just those in the entrepreneurial programs. If supporting young entrepreneurs is appealing to you, contact csdept@iastate.edu.