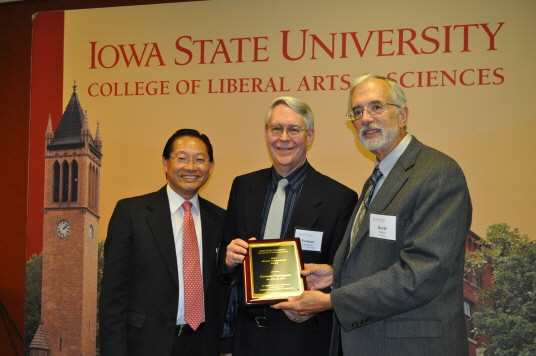 At the LAS College Alumni Awards ceremony that took place Thursday October 20, Norm Farrington (BS 1970 and MA 1972) was honored for his achievements and longtime relationship with the Computer Science department.

The winter 2008 edition of our alumni newsletter features Norm Farrington on the cover, with a story about his long history with our department. One of the earliest graduates of our bachelor's program, he earned his B.S. in computer science in 1970, and his MS in 1972. Norm is a creative entrepreneur, and in the 1970s built a DEC distribution company, COMPAS, which was later invested in by John Pappajohn, and sold in the early 1980s. Farrington's career was built at Gordman's department store, where he recently retired as the head of their IT department.

Norm has contributed a great deal to the university, the LAS College, and the Department of Computer Science. He established the COMPAS award for junior faculty, the Norman Farrington Innovation Center in Atanasoff Hall, and the Farrington Executive Reception Area in Iowa State's Alumni Center. Some of you may visit the Alumni Center during the homecoming festivities, near the stadium this weekend.

In the closing lines of the article that was written about Norm in our alumni newsletter, he notes that once upon a time, he didn't want the credit for giving to his university. Now, he says he is more comfortable with the recognition. We are proud to offer it to a deserving alumni whose gifts have enriched our faculty, students, and our collaborators, and whose relationship we value highly.