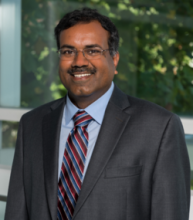 Alumnus Srinivas Aluru, Professor in the School of Computational Science and Engineering within the College of Computing at Georgia Institute of Technology, has been named ACM Fellow with the Association for Computing Machinery.  Aluru is one of 95 named to this year's class of ACM Fellows “for wide-ranging and fundamental contributions in areas including artificial intelligence, cloud computing, computer graphics, computational biology, data science, human-computer interaction, software engineering, theoretical computer science, and virtual reality, among other areas.,” the association announced.

Professor Aluru's award citation is "for contributions to parallel methods in computational biology and leadership in data science." He is the executive director of the Institute for Data Engineering and Science at Georgia Institute of Technology. He co-leads the NSF South Big Data Regional Innovation Hub, which serves 16 southern states and Washington D.C. He conducts research in high performance computing, data science, bioinformatics and systems biology, combinatorial scientific computing, and applied algorithms. He pioneered the development of parallel methods in computational biology, and contributed to the assembly and analysis of complex plant genomes.  He received his bachelor of technology in 1989 from the Indian Institute of Technology, Madras. He received his M.S. in 1991 and Ph.D. in 1994 from Iowa State University.  Aluru was honored with Iowa State University's College of Liberal Arts and Sciences John V. Atanasoff Discovery Award in 2017.

The ACM Fellows program recognizes the top 1% of ACM members for their outstanding accomplishments in computing and information technology and/or outstanding service to ACM and the larger computing community. ACM is the world's largest educational and scientific computing society with the mission to "bring together computing educators, researchers, and professionals to inspire dialogue, share resources, and address the field's challenges."

The ACM news release can be found here.